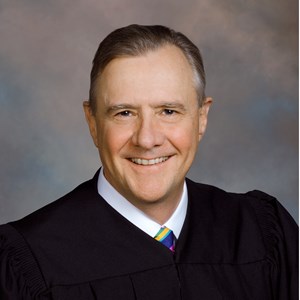 Wesley G. Marshall was appointed to the Virginia Workers’ Compensation Commission by the General Assembly in 2012 and reappointed in 2018. Previously, he was in private law practice for 23 years, primarily representing plaintiffs in workers’ compensation, employment and other civil litigation. He graduated from the University of Virginia with his B.A. with distinction in 1985 and his J.D. in 1988. He was admitted to practice before the United States Supreme Court, the United States Court of Appeals for the Fourth Circuit, the United States District Court for the Eastern and Western Districts of Virginia, the United States Bankruptcy Court for the Eastern District of Virginia, and the Virginia Supreme Court.
Wes is President of the Southern Association of Workers’ Compensation Administrators and on the Board of Directors for the National Association of Workers’ Compensation Judiciary. He serves on Dispute Resolution Committee and Chairs the Research and Standards Committee of the International Association of Industrial Accident Boards and Commissions. He was the first President of the Virginia Workers’ Compensation American Inn of Court and is member of the Lewis F. Powell, Jr. Inn of Court. The College of Workers Compensation Lawyers elected him as a fellow in 2015. He has lectured on workers’ compensation topics before numerous attorney and other groups. Wes has a particular interest in process improvement through objective technology and systems-based approaches. He promotes civility and professionalism in the bench and bar and seeks to instill positive values to promote value-driven delivery of services within Virginia’s workers’ compensation system.

We invite you to set up an online account to...

The members of IAIABC invite and encourage you to join! By working together, we can achieve our mission.

All membership applications for the IAIABC must be approved. All memberships are organizationally-based and individuals cannot join IAIABC.